Inventor of the Infomercial

Fee range:  U.S. & Canada (note: for Canadian events, client is responsible for any additional withholding tax)
Local (St. Petersburg and Tampa Florida): $17.5k, no travel due.
Keynote (up to 90 minutes): $25k.
Half day (up to 3.5 hours): $35k.
Full day (up to 6.5 hours): $50k.
Plus a flat flight and ground in home city fee of $2000. Client responsible for ground transportation in the host city and accommodations.
Travels from: Florida

Kevin Harrington – Inventor of the Infomercial, Original Shark on Shark Tank and As Seen on TV Pioneer – is one of the most successful entrepreneurs of our time.

In the early 1980’s, Harrington was busy launching companies and working as both a real estate and business broker selling thousands of properties and thousands of businesses. While watching television one night in 1984, he noticed that sometimes the only thing on the screen were the color test bars that stations ran when they had nothing else to air, thus giving him the idea to produce the industry’s first 30-minute infomercial to fill that dead air space. Thus, the birth of the infomercial.
Since that fateful night, he has been involved with over 500 product launches that resulted in sales of over $4 billion dollars worldwide and 20 products that reached individual sales of over $100 million. By 1990, Harrington was named one of the 100 best entrepreneurs in the world (by Entrepreneur Magazine).

In 2009, Harrington was selected as one of the original ‘Shark Tank’ Sharks on the ABC’s Emmy-Award winning show. His episodes can currently be seen nightly on CNBC.

He founded two global associations – ERA (Electronic Retailers Association), which is now in 45 countries and EO (Entrepreneurs Organization) which boasts more than 10,000 members. He is on the board of University of South Florida (USF) entrepreneur programs, and teaches regularly. He is also involved with Moffit Cancer Research and a variety of community based programs.

From Tony Little to Chubby Checker: Learning from Success and Failure
In this highly requested talk, Harrington tells the story of how he became regarded as visionary with a knack for knowing what will sell and how to sell it. Residing on the cutting edge of innovation and business trends, Harrington helps audiences turn good ideas into sound businesses, and teaches them how to launch products that will compete in today’s market. Harrington’s keynote presentations are powerful and relevant making him one of the most in-demand speakers on the circuit today.

Who This Lecture is Geared Towards: Entrepreneurs, Business Audiences, Consumer & Retail Experts, Students.
“The Art of the Pitch”
If you had one chance to deliver a knock out elevator pitch, could you do it? Or would you stumble and miss out on a potentially life changing opportunity? This finely tuned lecture was designed to ensure that you never fumble another pitch. Over the course of pitching and listening to pitches for more than 30 years, Kevin Harrington has synthesized the core principles of what to say, how to say it and just as importantly, what not to say.

Who This Lecture is Geared Towards: Aspiring Entrepreneurs, Intrapreneurs, Investors, Innovators, Students. 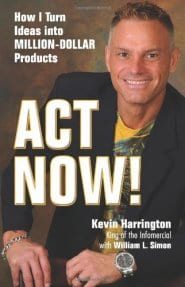 Microsoft was extremely happy with working with Kevin. He went far above and beyond to make sure that our messaging was included in his keynote. His messaging was spot on, and we definitely heard from the attendees that they liked what he had to say.