Laura’s story is impressive. She got her start as the youngest female presidential appointee in history, as the White House Director of Events for Bill Clinton. She authored a book that has helped people all over the world learn how to “Eat, Drink and Succeed.” And, thanks to her professional emcee and keynote work, in 2019, 2020 and 2021 was named one of “The 100 Most Influential People in the Global Event Industry.”

Fee range:  On location Emcee or Keynote services begin at $30,000 – $40,000. A specific quote is provided based on the duration and scope of the event. Packaged rates are available for multiple engagement commitments.
Travels from: Chicago, IL
Virtual: Virtual Engagements begin at $20,000 – $30,000

Laura’s story is impressive. She got her start as the youngest female presidential appointee in history, as the White House Director of Events for Bill Clinton. She authored a book that has helped people all over the world learn how to “Eat, Drink and Succeed.” And, as a result of her outstanding professional emcee and keynote work since 2000, in 2019, 202 and 2021 was named one of “The 100 Most Influential People in the Global Event Industry” and “One of the top 7 speakers in the United States” by Successful Meetings Magazine. Along with her cast of ITV London, Laura and team won the prestigious Drum Awards “Podcast of the Year” in 2021.

THE WHITE HOUSE YEARS
Laura Schwartz, as the White House Director of Events for the Clinton Administration, worked one-on-one with the President, the First Lady, World Heads of State and international business leaders as she created and executed more than 1,000 White House events including State arrival ceremonies and dinners, America’s Millennium Celebration, the UN Millennium Summit and NATO’s 50th Anniversary. While producing the President’s events on the world stage, Laura demonstrated the ability to inspire a nation and the world through powerful productions. At just 19 years old, she arrived at the White House, with no political connections, and began her climb up the ranks as a Staff Assistant, the Midwest Press Secretary, the Director of Television, and ultimately, the White House Director of Events. Following the administration, Laura travelled the world with Former President Clinton for the Global Initiative.

PROFESSIONAL EMCEE, KEYNOTE SPEAKER AND INTERVIEWER
Laura has been taking her empowering presentations to stages and virtually through screens across the world since 2001 and is well known for her dynamic keynotes and as a Emcee for multi-day conferences and events. Whether addressing an intimate gathering of 30 or a crowd of 30,000, Laura captivates audiences with her positive energy, expertise and enthusiasm. Laura has received high marks for her work as emcee for many prominent corporations including Hyundai Motor Company, Hewlett Packard, Microsoft, Uber, Mercedes Benz, AT&T, Cathay Pacific, HSBC, BlackRock, MACY’S, Hilton Worldwide, the Oprah Winfrey Network, Hyatt, NBC Universal, PepsiCo, Realtor.com, Coldwell Banker, Asembia Pharmaceutical and more.

LAURA’S BOOK: EAT, DRINK & SUCCEED
In “Eat, Drink & Succeed!” Laura shares the secrets to building powerful, effective partnerships where we least expect it – in our companies, communities and beyond. Drawing from personal anecdotes from people across the world, as well as her life and White House years, Laura reveals how to be ready for the next conversation that will change our lives or that of someone else when we least expect it and truly harness the networking power of social events.

Laura donates 100 percent of proceeds from books sold at or online during virtual engagements to a nonprofit of the client’s choice.

TELEVISION AND MEDIA COMMENTATOR
Laura has been a prominent face on television around the world since 2001, covering 7 presidential elections, 2 royal weddings and more. She got her start as a contract contributor for Fox News Channel before moving to CNN and CBS. Today, she is a weekly contributor on Australia’s #1 Morning Program “The Today Show” and the BBC. Laura is non-partisan and always positive as an authoritative source and commentator on a wide range of topics, including the American presidency, domestic and foreign affairs, women in business, leadership and philanthropy.

Eat, Drink & Succeed – the keynote your audience will be talking about all year. It’s motivational, humorous and engaging, but what makes it powerful is that it’s immediately actionable.

Lead First – a unique & dynamic presentation on leadership in times of success, turbulence and change.

Creating a Culture of Engagement – designed in response to requests for a program about her personal and professional journey, this keynote empowers audiences with 5 pillars of engagement that can change their lives.

Dynamic Virtual Keynotes – Laura can deliver any keynote as virtual to your team, association, audience or offices around the globe. 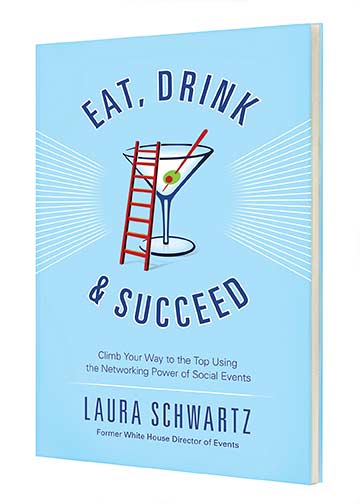