From Lying Paralyzed in a Ditch to Building a Multi-million Dollar Business. A perfect message for these uncertain times.

On a whim Scott Allen Frost went for a dirt bike ride on a beautiful afternoon in May 2009 and broke his neck, leaving him paralyzed from the shoulders down. Terrified, he was left to choose. Give up on life or try to make it better than it was before. Motivated by a series of surreal miracles that followed a cryptic commandment heard in the dark of his hospital room, Scott chose to live life to the fullest in the face of tremendous adversity.

Since his accident Scott has served as CEO of Titan Brands Hospitality Group. He and his team have designed, opened, and operated multiple restaurants and nightclubs in Nevada, Arizona, and New York. Scott has written two books including “Livin’ On a Chair” and the forthcoming “Roll With the Changes”.

Scott will share the story of his journey from lying hopeless in a ditch after his accident to building a multi-million dollar business from his hospital bed. As he persevered through a grueling physical rehabilitation he discovered the power of attitude, determination, and faith. You will be moved and inspired by the lessons he’s learned after he began a new life in a wheelchair. You’ll be left with steps on how to tap into the power that resides in and around all of us. 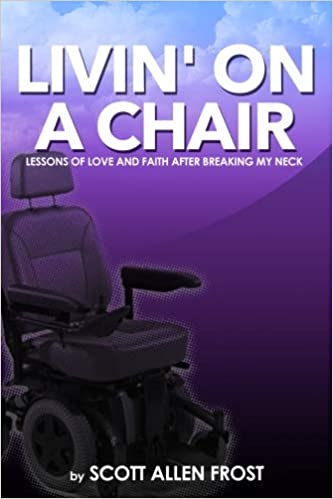 “Scott’s message is unique and impactful. His five lessons and life experience can benefit corporate teams, professional groups, and faith-based and nonprofit organizations.”

“If you are looking for a speaker, Scott’s a sure bet. It’s a powerful story. He’s living, breathing, standing proof that if you want something bad enough you can make anything happen.”