Steven Diamond, known world-wide for his recent appearance on the hit Netflix TV series “Tiger King 2 – The Doc Antle Story” and NBC’s “The Jane Pauley Show” teaches people how to stress less in the workplace with his interactive multimedia presentation entitled: “What The Tigers Taught Me”. Steven use’s the term “Tiger” as a metaphor for all of those shadowy creatures that lurk deep within us all. 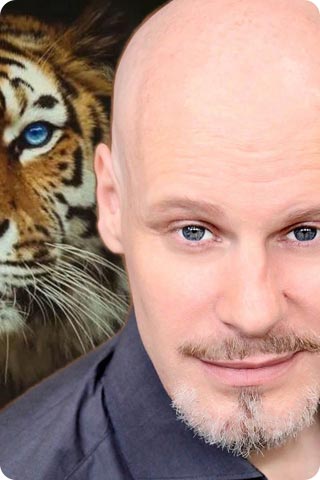 Steven Diamond has performed magic and illusion for the past three decades around the world, appearing in England, Germany, Korea, Brazil, France, Chile, Argentina, Colombia, Puerto Rico, and dozens of other nations. And as he performed before large crowds he left hidden his greatest secret: he suffers from Obsessive-Compulsive Disorder. He reveals his story in a new book, “OCD: A Life Among Secrets”.

Diamond knew he wanted to be a magician ever since his father took him to his first magic show at an amusement park at the age of 7. By the time he was 12 he was a hit on the corporate convention circuit raking in hundreds of thousands per year. In high school he was performing and touring his very own two-hour illusion show that included real lions and tigers. A tragic story of surviving the grips of an evil mastermind cult leader. A story he now tells in the hit Netflix TV series “Tiger King 2 – The Doc Antle Story”.

Today he is a keynote speaker and corporate trainer on the topic of “Stress in the Workplace”, with his popular multimedia presentation entitled: “What The Tigers Taught Me” where he captivates his audiences with his wild stories of working with exotic lions and tigers, he now demonstrates the life lessons these endangered beasts and surviving a cult taught him.

A Netflix Documentary about Steven’s life story is now in production.

Stress in the Workplace

Steven believes that – Transformation is more than just changing our ideas about ourselves; it’s a shift in the identity that affects how we perceive ourselves and how we show up in the world.

Steven’s model is based on the premise that self-awareness is the key to personal growth and lasting change. By exploring deeper levels of awareness, participants are able to identify obstacles, hidden assumptions, and beliefs that have been holding them back from achieving their full potential.

Steven teaches how to move from reactivity to receptivity by teaching the invaluable skill of how to self-regulate. His transformational leadership and culture transformation workshops fosters group wisdom, giving rise to creativity, inclusive solutions and sustainable results.

By actively engaging the whole person – the body, mind, heart, and spirit participants will be more successful at focusing attention, solving problems, and remembering solutions.

“Steven displays the utmost professionalism with his talents. He immediately forms a warm rapport with his audiences, and extends that same congeniality offstage as well. Steven is as enjoyable to work with, as he is to watch perform. He is eager to learn about the cast he works with, and is excellent at fitting his talents into the environment in which he performs. Steven is dependable, helpful, and a true professional.”